Two hundred farmers, researchers, academics and students from Finland, Sweden, the Netherlands, Ireland, the USA and from across the UK took part in what is believed to be the first ever conference on the emerging ‘ethical’ farming sector.

The event was co-organised by four farms – Mossgiel Farm, Peelham Farm, Rainton Farm and Whitmuir Organic –  all based in the south of Scotland.  The programme explored a systems-based approach to farming and regenerative models of food production that address growing public concerns about climate change, biodiversity, social impact and animal welfare.  The event was organised around sustainability principles; highlighting locally produced foods, using recycled paper and avoiding single use plastic.

“The conference is the start of a conversation that invites our industry to meaningfully explore the very real concerns that the public has with current food producing systems and how we might address them.  Ethically produced food is an important emerging market and livestock farming needs to have a place within that market.

“In the past few weeks we’ve seen a ‘climate emergency’ declared by political leaders across the UK.  We’ve also seen the publication of the UN’s IPBES report on devastating biodiversity loss, with the report calling for more sustainable, regenerative and ecological farming - exactly the topics that were discussed at the conference. There is a clear opportunity for Scotland to take the lead in incentivising ecological farming; pioneering a pasture-based, regenerative approach that is as sustainable as it is productive. The alternative, intensification, in a country that excels at natural, pasture based systems will place our whole industry in the frame as a health and climate liability.”

“For a relatively small country, Scotland’s efforts to tackle climate change, support farmers, and ensure the highest standards of animal welfare mean that we should be leading the way internationally in ethical and sustainable farming. I know that there is already a lot of enthusiasm for this amongst Scotland’s farmers but I would encourage everyone working within the industry to embrace taking a more future-focused approach to their work, to ensure that we continue to produce an abundance of food and drink, in an increasingly unpredictable global climate.”

"From choosing better grass seed to discussing what it's like to be a bat, this conference was about the practical philosophy of farming.  For too long, we've had a focus on 'reduction to production'; this was a refreshing look at the big picture, and at what farming is really for."

“The conference demonstrated the potential scalability of sustainable farming solutions to the respective climate change and ecosystem collapse emergencies recently reported by the UN. Both reports identify agriculture as one of the primary causes and both demand immediate legislative, industry and societal change. Farmers can and should regain the moral high-ground by leading the field in demonstrating positive change.  This conference was pulled together by farmers for farmers, responding responsibly to this call to action. There is no time to lose!"

Participants from across a range of disciplines commented on the importance of continuing the debate.  Professor Davy McCracken, Head of SRUC's Department of Integrated Land Management and Head of SRUC's Hill & Mountain Research Centre, said:

"To-date, early adopters of much more sustainable farming systems have been seen as somewhat 'out there' by others in the industry. But the innovations they are developing are relevant to all. And greater recognition and uptake of these will ensure that the industry as a whole is much more resilient and sustainable into the future."

“The conference was unusual in the broad mix of ages, genders and professional backgrounds who attended the event, and I found that diversity particularly enjoyable and stimulating.  There is growing interest in soil health, which was reflected in the discussion and questions asked, demonstrating a real understanding by delegates of the importance of maintaining soils.

“Soils are reservoirs of biodiversity, and by managing soils structure we can deliver a whole range of benefits. For example, healthy soils can reduce flooding risks, and building organic matter also allows soil to retain water in times of drought making the land much more resilient in extreme climate events.  By choosing the species in our managed grassland, for example by including lots of deep rooting plants, we can help put carbon into the soil as well as accessing minerals in the soil that can contribute to animal health, and by adding nitrogen fixing legumes to the grass mix we can help to reduce reliance on fossil fuels.”

Mary Clear, founder of Incredible Edible, spoke about the importance of empowerment and said:

“In a mixed up, Trumped up world, climate emergency and fixing the broken food systems must be priority.

It’s the small actions that will count, that means if we all flex our kindness muscles a little bit more,  positive change will be the consequence.”

“It was a privilege to be amongst such a diverse range of people - farmers, activists, politicians, membership organisations, researchers – from many countries, the UK and from Scotland. Plus a fair number of colleagues from SRUC. The debate was forward-thinking and wide-ranging. The fundamental focus was on animal and human wellbeing, and future sustainability of rural land and communities. Thought-provoking discussions coupled with great, local food - the perfect combination!”

“I was delighted to see a large turnout of attendees at the Ethical Farming Conference on what was mental health awareness week.  The National Rural Mental Health Forum stand, run by the mental health charity Support in Mind Scotland, had a great deal of interest in it, as people realise that the most important part of their farming businesses are the people that run and work on their farms. Looking after the mental health and wellbeing of our rural communities are a priority for all.”

“The Ethical Farming Conference 2019 did what it said on the tin; it inspired, challenged and will make change happen in our topsy turvy world of food and farming. Such a fundamental and essential stimulus to connect and work in harmony with nature will be reinforced and powered by the friendships and connections made at the conference. Change to our understanding of what constitutes real food and farming will and must come from the bottom up. The Ethical Farming Conference is the perfect wake up call for such a movement.”

"It was really good to have an event in Scotland for regenerative agriculture and new-fashioned farming – there is clearly such an appetite for it and events like this really help to add to the momentum."

US based holistic vet Will Winter said:

“I was thrilled and honoured to be among the lucky group that attended the 2019 Ethical Farming Conference. As I arrived and saw the snow white tents in a field of brilliant green and surrounded by the ancient stone walls, the beauty practically brought tears to my eyes! One could only ask, “why aren’t all farming conferences held outside in the fresh farm air?”  I particularly enjoyed the guided farm tours because attendees could see first-hand what it looks like to do it right.  Being served the delicious spreads of locally produced and handsomely served foods also helped me connect directly with what it is that we are building.

“It’s difficult for me to think of a better word than “ethical" to encapsulate the entire experience of this event. And I’m now referring to our gathering as the “First Annual Ethical Farming Conference” as I hope this will become just the first of many more equally fulfilling events!”

“We know that we’re a pain in the ass to those in the industry pushing an intensification agenda. We get it. But the market is changing faster than policy can respond.  Contrary to powerful, vested interests who are currently demonising all beef and dairy, GRASS-based beef and dairy can deliver good health and positive environmental outcomes.  That’s what the conference set out to explore.” 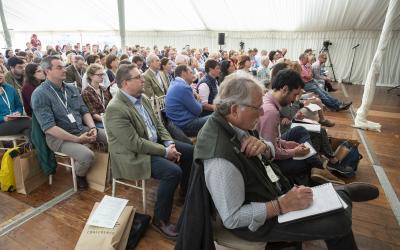 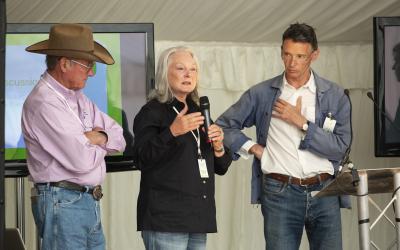 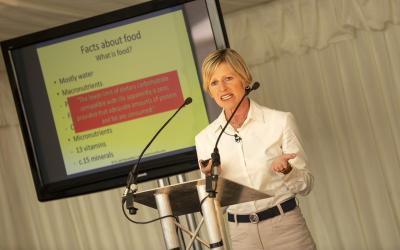